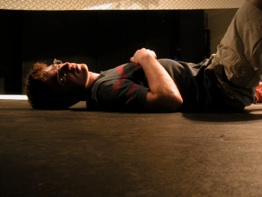 Joe Levasseur has collaborated with many dance and performance artists including: John Jasperse, Rose Anne Spradlin, Sarah Michelson, David Dorfman, Jodi Melnick, Beth Gill, Maria Hassabi, Ishmael Houston-Jones, Lee­ Saar the Company, Palissimo, Anna Sperber, Megan Sprenger, and Christopher Williams. He  has received two Bessie awards for his design work, including one with Big Dance Theater for Comme Toujours Here I Stand.  In 2008 he co-created and performed in “Game On”, a multimedia performance and installation at the Chocolate Factory in Long Island City.  In 2009 his Drop Clock installation was featured in the lobby of Dance Theater Workshop (New York Live Arts). In 2010 he showed a collection of original paintings at Performance Space 122.  In 2011 he filled in the spaces between designs and tours by being a draftsman for the Merce Cunningham Dance Company’s Legacy Tour. In 2012 he put together an album which is probably never going to be released, but ringtones are available at: www.joelevasseur.com.