An American Rendition uses integrated text, movement and extended vocal techniques to depict the story of an American citizen who is kidnapped, interrogated and tortured in a secret prison while we distract ourselves with TV reality shows. Using the remote control as a theatrical device, the company flips from reality (too hard to watch) to Reality Show (WAY more fun) as they offer up savage parodies of American Idol, Fear Factor, and America’s Next Top Model, shows which feature humiliation that we find delicious. An American Rendition was voted one of the top ten performances of 2008 by both Thirteen WNET and Gay City News.

Funding:
Commission by the NPN Creation Fund, the New York State Council on the Arts, a State Agency, and the American Music Center Live Music for Dance Program, The Department of Cultural Affairs 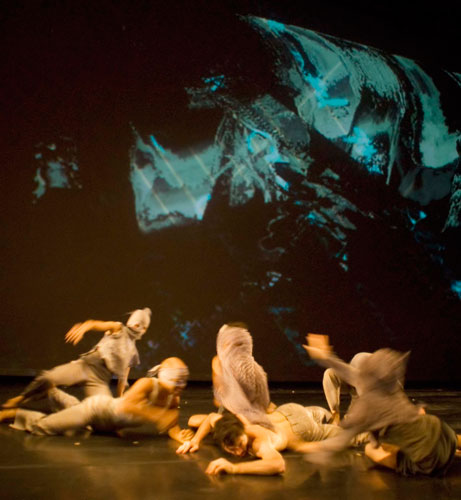 "Jane Comfort, (is) a choreographer who's tackled political issues with passion and mordant wit...Aided by her splendid colleagues, Comfort stitches her disparate materials together with almost faultless theatrical skill."

"Jane Comfort’s An American Rendition is the latest work in an oeuvre that continually reaches beyond what most other New York choreographers are producing. "